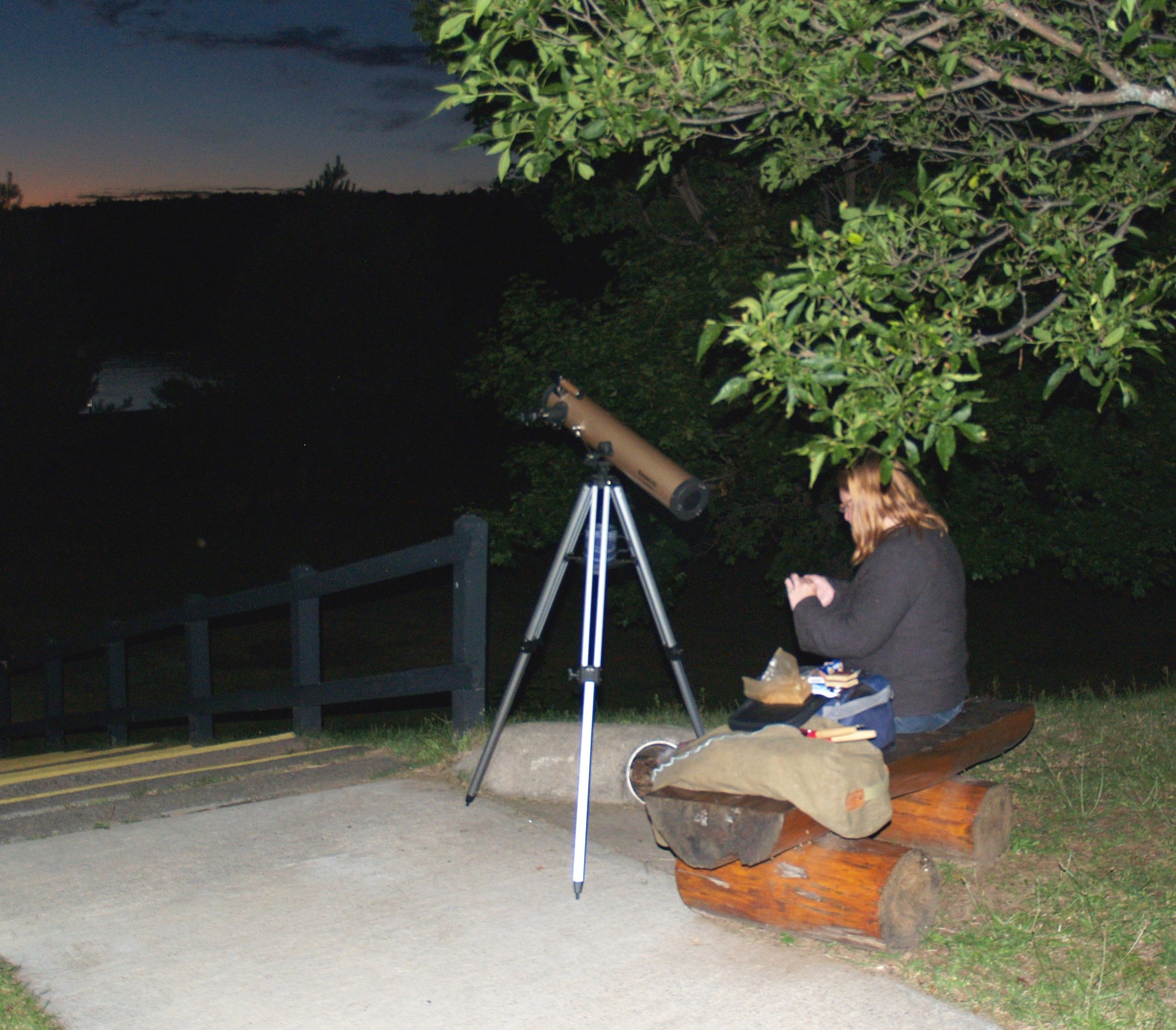 At parks from southeast Michigan to the Keweenaw Peninsula, day-use visitors and campers can enjoy a night of stargazing with complimentary s’mores and campfires. Participating parks will stay open later than their normal closing times.
“We encourage those who want to catch magnificent views with fellow park-goers to bring blankets, seating, bug spray and snacks and take part in one of these Meteors & S’mores events,” Buck said.
The Perseid meteor shower happens every summer, as the Earth passes through the debris trail of Comet Swift-Tuttle.
“The Perseids, which peak during mid-August, are considered the best meteor shower of the year. With very fast and bright meteors, Perseids frequently leave long ‘wakes’ of light and color behind them as they streak through Earth’s atmosphere,” according to the NASA website. “The Perseids are one of the most plentiful showers (50-100 meteors seen per hour) and occur with warm summer nighttime weather, allowing sky watchers to easily view them.”
A full Meteors & S’mores program schedule is available at michigan.gov/darksky.
“To take full advantage of the peak meteor shower activity that is estimated to take place Aug. 9-16, we suggest making camping reservations throughout the week and sleeping under the stars,” said Buck.
To check camping availability in state parks and make a reservation, visit www.midnrreservations.com or call 1-800-44PARKS.
Some of the Meteors & S’mores programs offer added fun, like the one at Warren Dunes State Park in Berrien County, which includes ghost stories around the campfire.
“We start our program around a beach campfire as the sun sets over Lake Michigan. I tell legends and ghost stories around the campfire. I focus on Michigan lore and history. The ghost stories are designed to be fun – and funny,” said Mike Latus, a guide with the DNR’s State Park Explorer Program who works at Warren Dunes. 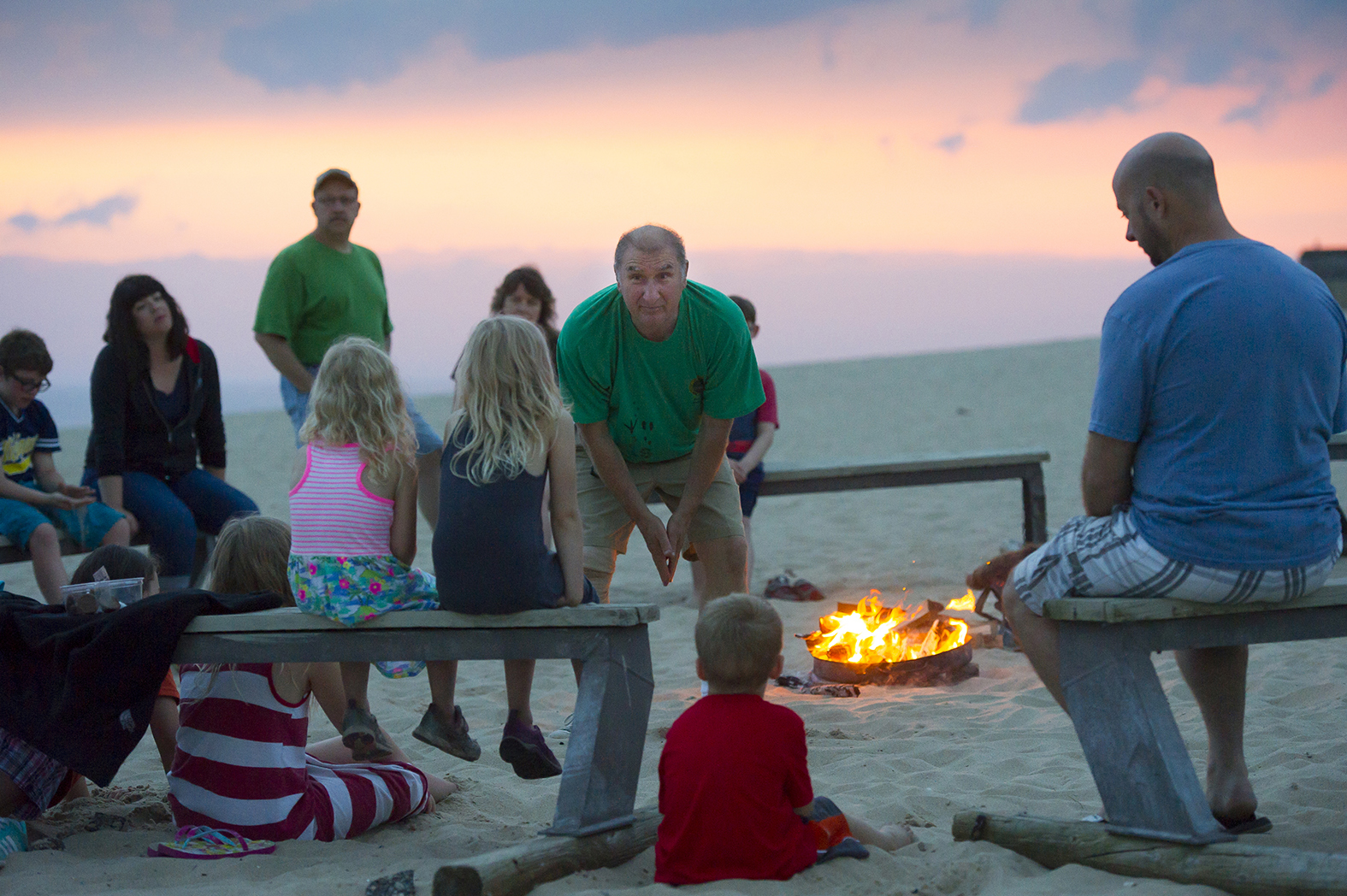 As the sky starts to darken, Latus and volunteers hand out supplies for making s’mores to attendees and set up park telescopes. They also hand out sky maps and help visitors learn how to find constellations.
“We often have more than 100 people viewing the sky,” Latus said. “Throughout the program, we watch for shooting stars. Each streak of light brings ‘oohs’ and ‘ahs.’”
At Fort Wilkins Historic State Park in Keweenaw County – site of a restored 1844 military outpost – astronomy meets history, as Meteors & S’mores visitors get to stargaze inside Fort Wilkins.
Island Lake Recreation Area in Livingston County partners with the local astronomy club to present the annual meteor-viewing event.
“The Ford Amateur Astronomy Club has been viewing the night sky at Island Lake for 25-plus years. Three years ago, I asked the club to participate with Meteors & S’mores,” said Andrew Haapala, DNR unit manager at Island Lake Recreation Area. “Their club agreed to participate and brought several telescopes for members of the public to view, tables with meteorites, and a presentation on the solar system. The club is lined up for their third Meteor & S’mores event to be held on Aug. 12 at Spring Mill Pond.”
That partnership led to another with the Great Lakes Association of Astronomy Clubs, which is teaming up with the DNR to present Astronomy at the Beach at Island Lake on Sept. 29 and 30. This family-friendly event, featuring a variety of hands-on activities, will give visitors a chance to enjoy the park and the night sky while learning a little about astronomy.
If you’re looking for a place to explore the night sky on your own, many state parks make great stargazing locations. 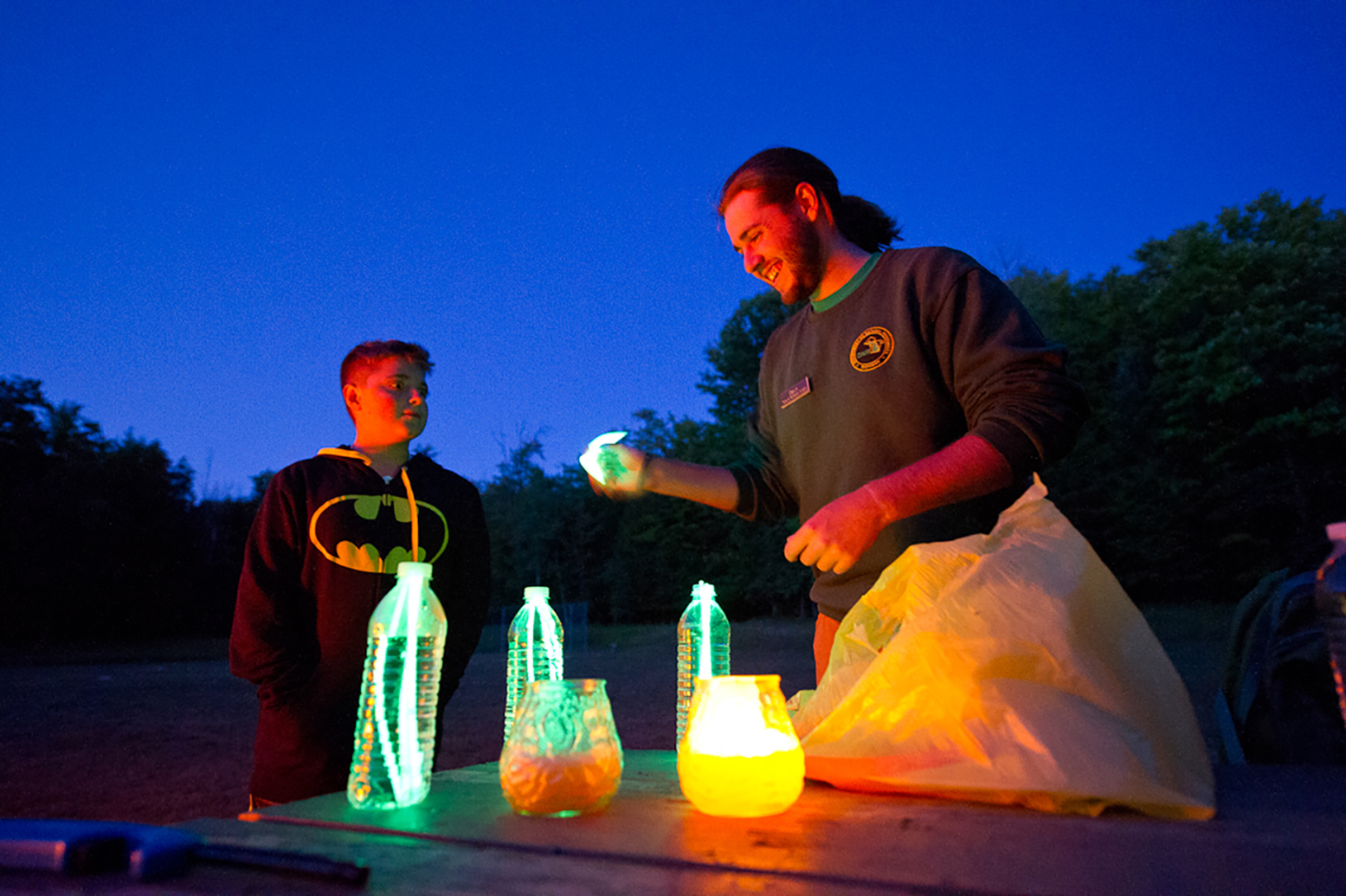 There are state-designated dark sky preserves – ideal locations for astronomy, as they are protected against light pollution – in six Michigan state parks: Lake Hudson Recreation Area in Lenawee County, Negwegon State Park in Alcona County, Port Crescent State Park in Huron County, Rockport Recreation Area in Alpena County, Thompson’s Harbor State Park in Presque Isle County and Wilderness State Park in Emmet County.
Michigan’s Upper Peninsula is recognized as a dark sky viewing area and also offers excellent stargazing opportunities across more than 15,000 square miles.
Another great option for viewing the night sky is Headlands International Dark Sky Park in Mackinaw City, the only internationally designated dark sky park in the state.
In March, Headlands International Dark Sky Park was awarded the second annual Pure Award, recognizing Michigan tourism entities that have pioneered innovative and exemplary best practices in natural, cultural and/or heritage stewardship.
“Headlands was selected as this year’s winner based on the importance the park has put on the night sky as a vast and vanishing natural resource,” said Maia Turek, DNR statewide recreation programmer and co-chair of the Resources and Environment Implementation Committee of the 2012-2017 Michigan Tourism Strategic Plan, the group that gives the Pure Award.
An Emmet County park, the Headlands International Dark Sky Park property is available to the public thanks, in part, to funding from the Michigan Natural Resources Trust Fund. To learn more about Headlands, visit midarkskypark.org. 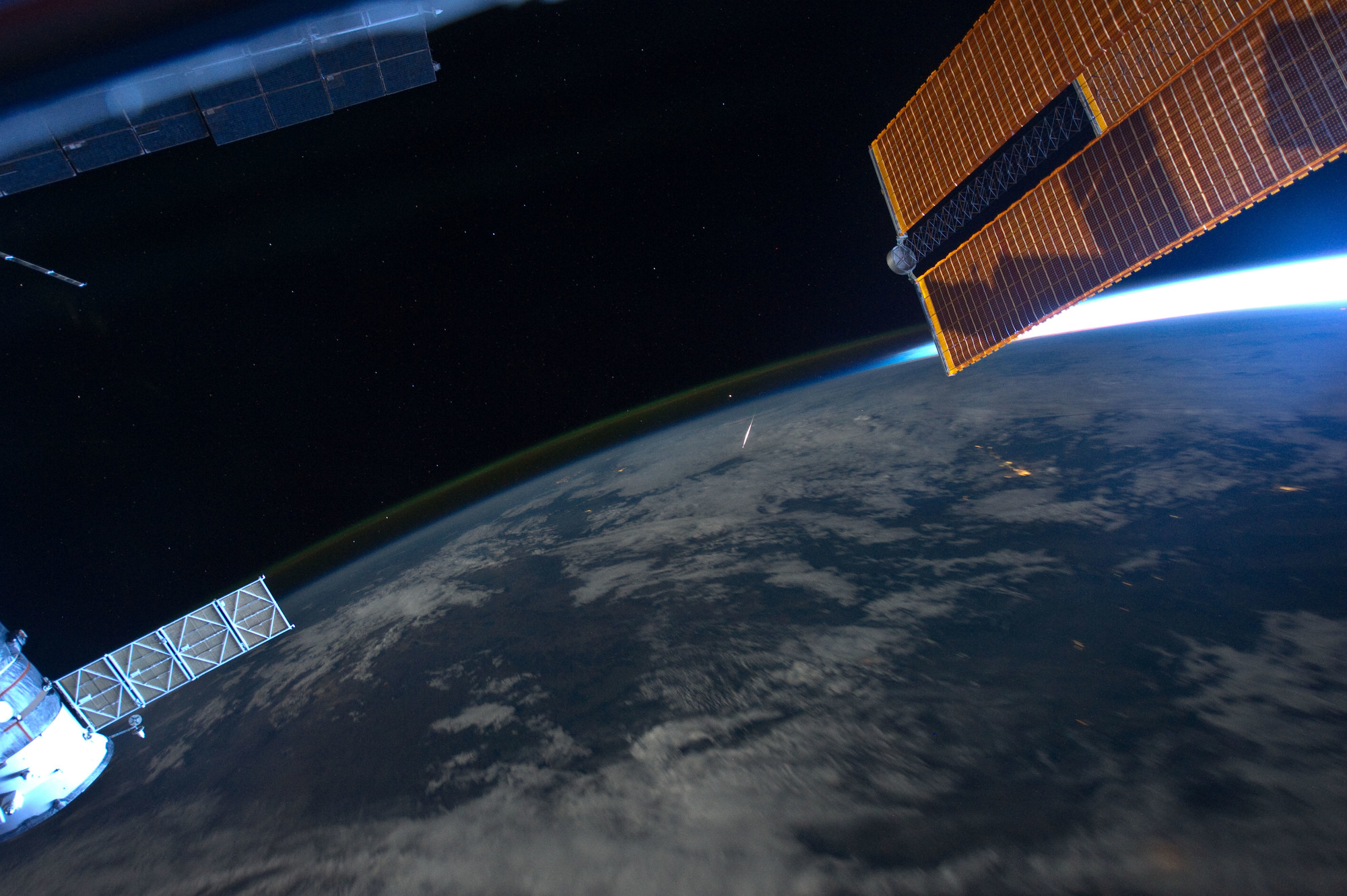 Michigan, along with the rest of North America, will get the chance to experience another unique cosmic phenomenon this month – this one during the day – with the solar eclipse on Aug. 21. It will be the first time a total eclipse has crossed the United States, coast-to-coast, since 1918.
Because we’re outside the total eclipse path that runs from Oregon to South Carolina, Michigan will see a partial eclipse, where the moon only covers part of the sun’s disk.
Find out more at NASA’s Eclipse 2017 website.
For more information about Meteors & S’mores and other opportunities for stargazing in state parks, go to michigan.gov/darksky.
Check out previous Showcasing the DNR stories and subscribe to upcoming articles at www.michigan.gov/dnrstories.
/Note to editors: Contact: John Pepin 906-226-1352. Accompanying photos are available below for download and media use. Suggested captions follow. Credit: Michigan Department of Natural Resources, unless otherwise noted.
Fire: Toasting marshmallows on a fire is one of the fun Meteors & S’mores activities at select Michigan state parks.
NASA-1: In this 30-second exposure, a meteor streaks across the sky during the annual Perseid meteor shower Friday, Aug. 12, 2016 in Spruce Knob, West Virginia. (NASA/Bill Ingalls photo)
NASA-2: Astronaut Ron Garan, Expedition 28 flight engineer, tweeted this image from the International Space Station in August 2011. (NASA photo)
NASA-3: In this 30-second exposure, a meteor streaks across the sky during the annual Perseid meteor shower Thursday, Aug. 13, 2015, in Spruce Knob, West Virginia.(NASA/Bill Ingalls photo)
NASA-4: Astronomer Fred Bruenjes recorded a series of many 30-second-long exposures spanning about six hours on the night of Aug. 11 and early morning of Aug. 12, 2004 using a wide-angle lens. Combining those frames which captured meteor flashes, he produced this dramatic view of the Perseids of summer. There are 51 Perseid meteors in the composite image, including one seen nearly head-on.(Fred Bruenjes image)
Program: Devin Burke, a State Park Explorer Program guide, has fun with a visitor at the Meteors & S’mores program at Young State Park in Charlevoix County.
Telescope: A visitor gets ready for the meteor shower at Van Riper State Park in Marquette County.
Warren: Mike Latus, State Park Explorer Program guide at Warren Dunes State Park, talks with some young park visitors./

🏷️ Related Tags From This Story:

When Are Energy Audits a Waste of Money? Great Lakes Energy News: August 2017